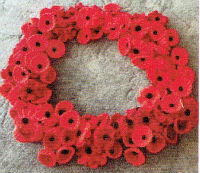 Our church remembers those who sacrificed so much in conflict so that we might live in peace.
The above image of our local community knitted poppies shows just one way in which we support the British Legion.

The Grantham Journal reported in March 1915 a Roll of Honour was unveiled and dedicated to the 30 members and scholars of the church who joined the army to serve in World War 1.

This Roll of Honour hung in the church for many years and was eventually restored as part of the Parish 1st World War Centenary Commemoration Project.

It was rededicated at a service in the church on Sunday 8th March 2015.