The Calling of the Methodist Church is to respond to the gospel of God's love in Christ
and to live out its discipleship in worship and mission.

The Good News is God loves us unconditionally.
In response as far as we are able, with God's help, we:-
Pray. Worship. Care. Listen. Learn. Practise.
Live. Serve. Speak. Justice. Creation. Share.

So when did this Methodist way of life begin?

It  started back in the early 18th century when John and Charles Wesley with friends as students at Oxford   University began a 'holy club' which became nicknamed as Methodists because of their methodical approach   and the name stuck. With others they began a movement which grew with such strength and impact that   separation from the Church of England was inevitable. So by 1795 Methodism was legally and formally born.

John Wesley with friends at Oxford

Wesley Day also known as Aldersgate Day is May 24th when the Methodist Church recognises and celebrates   the experience of John Wesley's conversion in a Meeting Room in Aldersgate Street, London when he realised   confirmation of his salvation through the grace of God. 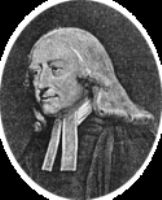 Methodism had its challenges particularly between the Wesleyans and the Primitives. This and other schisms   were resolved and unification happened in 1932 to form the present day Methodist Church.
Charles wrote over 6000+ hymns while John became a famous preacher whose sermons remain the doctrinal   standard of the Methodist Church. It was John's organisational genius which developed a spontaneous   movement into a structured body which is the origin of the world wide Methodist Church.

The Methodist Church is one of the largest Christian churches serving Great Britain, with nearly 265,000   members and regular contact with over 800,000 people. It has about 5,800 churches in Great Britain and also   maintains links with other Methodist churches totalling a worldwide membership of 70 million.
The calling of the Methodist Church is to respond to the Good News of God’s love in Christ and to live out its   discipleship in worship and mission.
In worship Methodists give thanks to God who loves us and has set us in this world of possibilities.
Methodist worship is characterised by a lively tradition of hymn singing and a passionate regard for preaching   the love and justice of the gospel of Jesus.
Methodists believe in what John Wesley Methodism’s founder, called ‘social holiness’. The longing for holiness   is not about wanting to be ‘holier than thou’. It is about wanting the love of God to permeate all of our lives and   for that love to be shown through our lives to other people.
Methodists embrace care for individuals and communities; involvement in education and development for all, in   struggling for a just world, being alongside the poor, caring for the earth and getting to know other cultures and   faiths.
A priority of Methodists is to tell people about the Good News of Jesus and call them to faith and to Christian   Discipleship.
Methodists have always believed that no one is beyond the reach of God’s love.
Salvation is there for everyone who turns to God and not just for a chosen few.
It is a strong feature of Methodism that lay people (those who aren’t ordained) should play a major part in the   running of the Church. A recent survey of Methodist congregations revealed that (from those who responded)   three out of four individuals held some sort of church role.
Worship each week is not always led by an ordained minister but often by a local preacher – a lay person who   has been trained and authorised to lead worship. At all levels of the Methodist Church lay people are involved   in decision making.
We celebrate our Methodist heritage and the impact the movement has had on the cultural landscape. We live   in a fast-changing world but we believe the central Christian message has not changed, from the time of Jesus   right through to the present day. We endeavour to ensure that this message of Jesus Christ is relevant to new   generations.

If you want to find out more about the history, heritage and all that makes the
Methodist Church of Great Britain visit www.methodist.org.uk